Lesson 1: The alphabet
בֵּֽאלֹהִים (step 5 of 8)
Beginning to use Hebrew
If this were a language class for a modern language, we would now be introducing our first conversation: “Hi, how are you? My name is…” But since we are interested in learning to read an ancient language of the Bible, our first words will quite different!
The video below contains our first worship song. The lyrics are Psalm 44:9 (Psalm 44:8 in English). Listen to the song a few times. Your goal is to get the song in your head and your heart, and as a result learn to pronounce and understand the words you are singing.
Click the play button to watch a selected portion of this video.
The vocab
Let’s take a closer look at the words in this song and words they are related to.
אֱלֹהִים
2598x
God, gods (noun)
בֵּאלֹהִים in God
masc plural
248x
אֵל God, god (noun)
singular version
הָלַל
165x
praise, boast (verb)
הִלַּלְנוּ we have boasted
piel perfect 1st common plural
הַלְלוּ־יָהּ hallelujah (i.e. praise the Lord)
combined with the abbreviated name of God
56x
תְּהִלָּה praise (noun)
from the same root
כֹּל
5521x
all (noun)
יוֹם
2319x
day (noun)
הַיּוֹם the day
masc singular
שֵׁם
881x
name (noun)
וְשִׁמְךָ and your name
masc singular construct
17x
שֵׁם first son of נֹחַ
his name means name!
עוֹלָם
438x
eternity (noun)
לְעוֹלָם unto eternity
masc singular
סֶלָה
74x
[ pause ] (poetic marker) 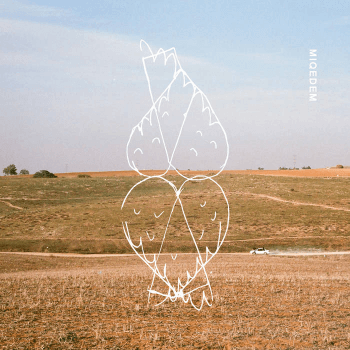 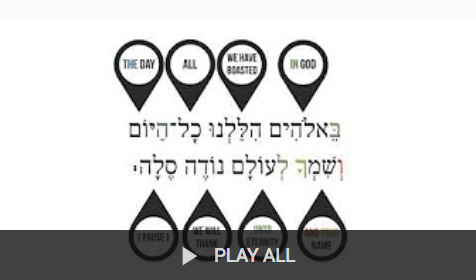 Another option for surrounding yourself with the course songs.
Why is it verse 9 in Hebrew, but verse 8 in English?
Due to different versification schemes, Old Testament verse and chapter numbers do not always line up between languages. In large part, there are three different versification schemes. (No need to memorize this information. It is here simply for the sake of explanation and curiosity.)
The result of all of these differences in the psalms is that often verse numbers will be off by one when comparing the English and Hebrew. In addition, chapters of other books of the Bible do not at times start and end at the same point, causing a similar issue.
Thankfully, you usually do not need to worry about this on Biblearc, as the app will automatically line-up the proper verses when using both Hebrew and English, despite differences in versification.
Biblearc app Path Courses Courses Learning Resources Login / Free Account Subscription
Glories Authors Groups Donate Gift certificates Ownership, thanks, copyrights and terms